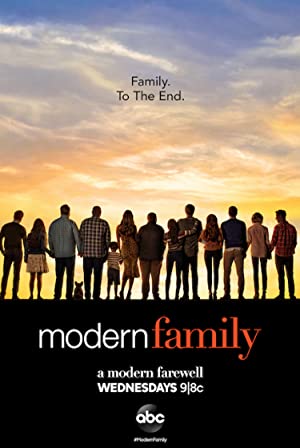 Told from the perspective of an unseen documentary filmmaker, the series offers an honest, often-hilarious perspective of family life. Parents Phil and Claire yearn for an honest, open relationship with their three kids, but a daughter who is trying to grow up too fast, another who is too smart for her own good, and a rambunctious young son make it challenging. Claire's dad Jay and his Latina wife Gloria are raising two sons together, but people sometimes believe Jay to be Gloria's father. Jay's gay son Mitchell and his partner Cameron have adopted a little Asian girl, completing one big -- straight, gay, multicultural, traditional -- happy family.

(media) [comedy] The S1E1 Podcast | Episode 71 - Modern Family | Each week we break down pilots for some of the best and worst sitcoms of all time | In this episode the boys of S1E1 broke down the very first episode of Modern Family. Available on all platforms | S1E1Pod.com 2 comments

(media) Made yet another video on Modern Family! I talk about the plot of the plane episode (season 1 ep 3.) Please give it a watch if you can :) 2 comments

What's the song/soundtrack that sounded like a guitar playing in Modern Family's Season 4 Episode 21 (Career Day) it starts from 20:17 and stays on in the background till 20:44. Please help me find it! 4 comments

[No spoilers] Why are there no episode discussions in the archive after S7E6? 1 comments

On Season 7 Episode 7 but semi have the series finale spoiled. How the fck do from Andy and Hailey not ending together. 13 comments

This was my favourite epsiode (S7 E18), when mitchell and phil get high together, tell me your favourite episodes and moments from Modern Family 88 comments

This American Life on S8E14 "Heavy is the Head" 0 comments

Modern Family S11E13 'Paris' Episode discussion thread 161 comments
(media) Modern family season 11 episode 13 Paris IMDb trivia section. It says here that both Nolan Gould and Ariel Winter appear as extras in the Notre Dame scene. I don't see them in the Notre Dame. Can someone please tell where they are in the scene with a picture so I can locate them? 16 comments

Don't have contact with like 99.8% of my family, Modern Family got me through these "Family Time" dates I might rererewatch one more time before getting to the finale. :') 1 comments