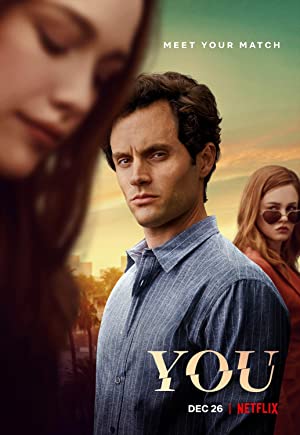 Based on Caroline Kepnes' best-selling novel of the same name, YOU is a 21st century love story that asks, "What would you do for love?" When a brilliant bookstore manager crosses paths with an aspiring writer, his answer becomes clear: anything. Using the internet and social media as his tools to gather the most intimate of details and get close to her, a charming and awkward crush quickly becomes obsession as he quietly and strategically removes every obstacle - and person - in his way.

I'm pretty sure I found out what the big plot twist is going to be after E6... 8 comments
Why do people hate on Beck even before episode 6? 36 comments
YOU S01E06 "Amour Fou" - Episode Discussion 275 comments
Episode 6 (I think) when Joe visits Peach with the Balloon. 15 comments
(media) 'YOU' star Penn Badgley says Dan Humphrey comparisons will end with episode 6 7 comments
(media) YOU || EPISODE 06 "Amour Fou" // Recap Rewind // 0 comments

YOU S01E08 "You Got Me, Babe" - Episode Discussion 235 comments
I just started watching "You" on Netflix yesterday and I'm on Season 1 episode 8. Wtf is wrong with Joe and Beck? (SPOILERS) 7 comments

(media) LIVE DISCUSSION NOW! YOU - SEASON FINALE | EPISODE 10 “Bluebeard’s Castle” // Recap Rewind // 1 comments
YOU S01E10 "Bluebeard's Castle" - Episode Discussion 749 comments
what does love mean when she asks joe “how old were you the first time?” and joe’s says “nine” in episode 10 3 comments
Episode 10 ending: do you really think that.. 17 comments

YOU S02E05 "Have a Good Wellkend, Joe!" - Episode Discussion 499 comments
Fellow fans of this show, watching on an older platform that keeps it's star rating (instead of the percentage thing they do now, did you know this show only has 2.5 stars on Netflix? 1 comments

YOU S02E08 "Fear and Loathing in Beverly Hills" - Episode Discussion 635 comments
(media) Season 2 Episode 8 of You (2019) The main character gets drugged and has the time 8:51 drawn on his arm so he knows how much time has passed when he comes to. Every time he is hallucinating, like in this moment, the time on his arm changes to 8:52. 0 comments

YOU S03E01 "And They Lived Happily Ever After" - Episode Discussion 810 comments
Watching season 3 ep 1 will update as I go 2 comments
Alexa play you season 3 episode 1 0 comments
You Season 3 - Episode 1: How do you imagine it beginning? 20 comments

YOU S03E10 "What Is Love" - Episode Discussion 2001 comments
(media) In S3E10, Joe regains control of his body right before Love begins to get closer to Marienne to kill her, before being interrupted by Juliette. Did anyone of you guys notice this? I didn't catch it. 11 comments