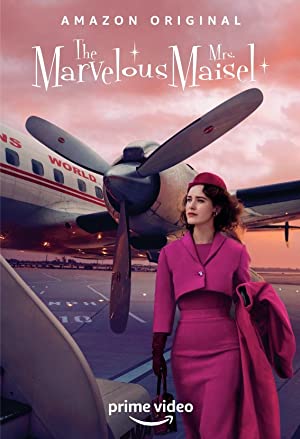 Set in 1950s Manhattan, The Marvelous Mrs. Maisel is a 60-minute dramedy that centers on Miriam "Midge" Maisel, a sunny, energetic, sharp, Jewish girl who had her life mapped out: go to college, find a husband, have kids, and throw the best Yom Kippur break-fasts in town. Soon enough, she finds herself exactly where she had hoped to be, living happily with her husband and two children in the Upper West Side. A woman of her time, Midge is a cheerleader wife to a man who dreams of a stand-up comedy career, but her perfect life is upended when her husband suddenly leaves her for another woman. Utterly unprepared, Midge is left with no choice but to reevaluate her life. When she accidentally stumbles onto the stage at a nightclub, she discovers her own comedic skills and decides to use this newfound talent to help her reinvent her life. The series follows the trajectory of Midge's journey as she pursues a career in the male-dominated, stand-up comedy profession, and transforms from uptown society matron to East Village club performer.

[Episode Discussion] Season 1 Episode 1 "Pilot" 28 comments
(media) Recap of Episode 1 (season 2). Disclaimer: this is my first attempt at a review...know it’s rough, but wanted to try something new! Hoping it can at least spark some discussions. 3 comments
Over at /r/S01E01 we nominate and discuss a new episode one each week and this week we are discussing The Marvelous Mrs Maisel! We would love it if you would join us 1 comments

[Episode Discussion] Season 1 Episode 7 "Put That On Your Plate!" 22 comments

Episode Discussion: S03E08 - A Jewish Girl Walks Into the Apollo 838 comments
[S03E08 ending discussion] What if... 4 comments
[S03E08 spoilers] Midge's Apollo performance, and everyone seemingly having the idiot ball 22 comments

[Episode Discussion] Season 4 Episode 1 "Rumble on the Wonder Wheel" 442 comments
From the first word of S4 E1, I knew that... 54 comments

[Episode Discussion] Season 4 Episode 8 "How Do You Get to Carnegie Hall?" 562 comments