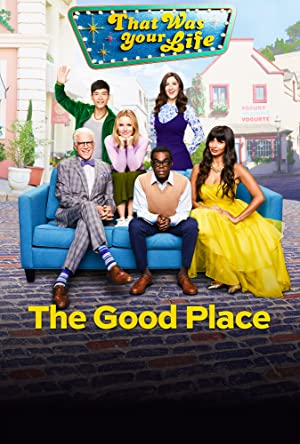 The Good Place is a town where those who have been good throughout their lives go once they have passed away. Michael (Danson) is the architect who oversees the town--and this is the first one he has been in charge of creating. Eleanor (Bell) arrives at the Good Place and realizes they have her name right, but everything else is wrong. She isn't meant to be there at all. With the help of Chidi, her soul mate (Harper), Eleanor tries to right her wrongs, seeking to finally earn her spot in the Good Place.

Episode Discussion: S01E01-02 "Everything is Fine" / "Flying" 58 comments
The Good Rewatch: S1E1 Everything Is Fine 44 comments
/r/s01E01 is a sub where we watch the first episode of a tV show and then discuss what we think. why not come along and tell everyone why the good place is so good and why they should keep watching it? 0 comments
(media) Here's a clip from our newest episode where we talk about the Pilot episode of The Good Place! Please check us out at S1E1POD.com 0 comments
(media) Lee Aronsohn (co-creator of "Two And A Half Men", "The Big Bang Theory") & Sony TV will talk about THE GOOD PLACE's episode 1 "Pilot" on Tuesday, May 25 @ 6pm PT 0 comments
S1E1: In the first episode chidi says he’s actually speaking French but the good place is translating. So how come when they go to earth he is speaking English? 20 comments
In Episode 1 of Season One, Chidi is speaking French and says that the Good Place translates what you say into a language that the other person can understand but... 5 comments

Episode discussion Season 1 Episode 9: ...Someone Like Me as a Member 184 comments
The Good Rewatch: S1E9 Someone Like Me As A Member 2 comments
[Discussion] Anyone else think EP09 was kinda boring? 1 comments
Trying to give Brooklyn 99 a chance because I saw that Schur was co creator. I'm up to episode 9 in season 1. I'm really trying but Samberg is just a little to over the top for me. I thought I'd enjoy it bc I love The Good Place. Will keep trying though. 20 comments

Episode Discussion: S01E12 "Mindy St. Clair" 67 comments
The Good Rewatch: S1E12 Mindy St. Claire 6 comments
(media) Easter Egg hidden in Season 1. (Ep 12) - the back of the magazine is the same otter that was in the Welcome to the Good Place video 70 comments

On episode 45 of the good place podcast at 29:50 marc asks about a line that comes from magic mike and someone tells him to watch the film and he just innocently says “no I don’t” 2 comments

Episode Discussion S02 E02: "Dance Dance Resolution" 837 comments
S2E02 this is my favorite episode and why. What's yours and why? 157 comments

Episode Discussion S02 E05: "The Trolley Problem" 611 comments
The Good Rewatch: S2E5 Existential Crisis 3 comments
(media) While they're playing out the Trolley Problem (S02:E05) they zoom by a theater showing "Strangers Under a Train" and "Bend It Like Bentham." Jeremy Bentham is considered to be the father of modern utilitarianism, the philosophy Chidi had just been discussing. 33 comments

Episode Discussion S03 E07 "A Fractured Inheritance" 897 comments
(S3E7 Spoilers) Anyone else a little upset with how they seemed to portray ... 11 comments

S3E10 Janet(s): Episode Discussion 1758 comments
S3E10 Detail from the most recent episode that I haven't seen discussed yet 21 comments
(media) S3E10 - "How The Good Place Made Its Very Special Janet Episode" (And there's a HUGE hint about the point system from Mike Schur) 11 comments
S3E10 We need to address this. Not being able to swear in the Good Place. For me, last episode is a massive headache. Read on. 7 comments

There’s a major plothole that i just noticed now in season 3. If the good place hasn’t gotten residents in over 300 years, but Mindy St Claire got her own “medium place” in the 1980’s-1990’s that means Mindy St Claire is technically better than everyone whos died in those 300 years. 12 comments

I've browsed and browsed.... Does anybody know which platform is streaming The Good Place S4 E1-8. I'm sure this has been discussed before, but I'm not having much luck finding the answer to this question. Side question: Why are streaming platforms only offering the later half of season 4? 9 comments
S4E1 Discussion 32 comments
(S04E01) Crazy theory about the Bad Place's real plan 15 comments
S4E1 A Girl From Arizona (Part One) 1329 comments

S4E5 Employee Of The Bearimy 1371 comments

S4E8 The Funeral To End All Funerals 2162 comments

S4E12 Patty 2439 comments
FINALE SPOILER - Podcast S4 ep 12 discussion 4 comments
Bernard Williams (philosopher) & The Good Place [Spoilers for S4EP12] 0 comments
(media) Noticed during my second time watching the show that the office where Michael signs the contract in The Good Place in S4E12 is the same exact office in S1E9 where Eleanor quits her job in a flashback. 16 comments

(media) I was watching this scene from Season 5 Episode 8 of Parks and Recreation and I was getting HUGE The Good Place vibes. Maybe this scene was inspiration for that part of “The Good Place”? 23 comments