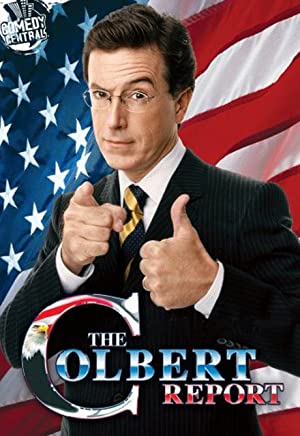 An offshoot of The Daily Show, The Colbert Report (the Ts in Colbert and in Report are silent) is a parody of shows like "The O'Reilly Factor." Colbert begins the show with teasers about the show's content and then the credits go by, with a giant eagle and the stars and stripes featured predominantly. Colbert will pepper commentaries with phrases like, "Look, I don't have time to read books," or, "President Bush isn't a head thinker, he's a gut thinker." Aspects of talking head programs are exaggerated and Colbert presents a host overwhelmed by his own importance. Guests do not walk on-stage but are seated at a small table to the side. Colbert runs over to them, encouraging the audience to applaud and high five him as he passes. He is then likely to begin an interview by asking a guest something like, "Explain evolution in 20 seconds," or "Isn't everyone who disagrees with the president guilty of treason?" Colbert is also very clear about our number one threat, "Bears." His distrust of bears is a continuing theme.