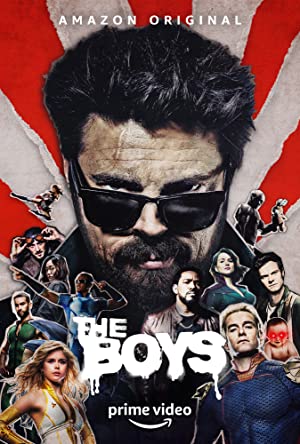 The Boys is set in a universe in which superpowered people are recognized as heroes by the general public and owned by a powerful corporation, Vought International, which ensures that they are aggressively marketed and monetized. Outside of their heroic personas, most are arrogant and corrupt. The series primarily focuses on two groups: the titular Boys, vigilantes looking to keep the corrupted heroes under control, and the Seven, Vought International's premier superhero team. The Boys are led by Billy Butcher, who despises all superpowered people, and the Seven are led by the egotistical and unstable Homelander. As a conflict ensues between the two groups, the series also follows the new members of each team: Hugh "Hughie" Campbell of the Boys, who joins the vigilantes after his girlfriend is killed in a high-speed collision by the Seven's A-Train, and Annie January/Starlight of the Seven, a young and hopeful heroine forced to face the truth about the heroes she admires.

(media) Following my last post, I have scheduled The Boys Season 1 Episode 1 watch party on the 27th of August 2020 at 8 pm PST! Join fellow The Boys fans to discuss Season 1 Episode 1(link in the comments) as we prepare for Season 2! Let me know if anyone is interested :) 10 comments
Season 1 Episode 1: The Name of the Game - Episode Discussion 615 comments
(media) During lockdown, I have been creating an app where we can discuss the key moment of shows as you watch it. I am trying it out with The Boys to begin with. Who is interested in having a watch party of some sort for Episode 1 and we can discuss it with other The Boys fans? 11 comments
Diabolical: Season 1 Episode 1 unofficial Discussion thread 61 comments
(media) Seth Rogan and Evan Goldberg cameo The Boys Diabolical: S1 E1 35 comments
(media) Anyone else watching Invincible, on Amazon Prime? It’s basically a cartoon version of the Boys. But fuck me.... there’s some shit that happens near the end of Episode 1, that would make Homelander shit himself. 11 comments
(media) The Boys Episode 1 8 comments
Why didn't The Boys use the footage of A-Train laughing about killing Robin from episode 1x1? 3 comments
[spoilers S1E1] I made A-Train from the boys in Lego, as an accessory I gave him Robin 123 comments

Season 1 Episode 2: Cherry - Episode Discussion 449 comments
(Spoilers for The Boys Diabolical: episode 2) Anyone surprised that… 16 comments
Started Watching the Boys for the first time, just finished Episode 2 and here is what I have to say 6 comments
Why would Victoria Neuman blow up Marathon and how did she blow up that CIA agent in front of the boys in episode 2(i think) ? 18 comments
The Boys spinoff reference in episode 2 0 comments
(media) [Spoilers S1E2] I made Hughie from the boys in Lego, as an accessory I gave him Translucent 3 comments

(media) Killin supes - the boys presents diabolical 1x03 6 comments
Season 1 Episode 3: Get Some - Episode Discussion 340 comments
Diabolical: Season 1 Episode 3 unofficial Discussion thread 74 comments
In season 1 episode 3 of The Boys why did Homelander shoot Queen Meave after he killed the shooter guy? 3 comments
[SPOILER] The Boys Episode 3 - Difference between English and German version 8 comments
(media) da boys on... The Boys Episode 3 has been cast. Find it on your favorite podcast provider for this week and 5 more of table side dialogue from three fans from the early comics. Get the mature edition you deserve. It's Diabolical... 0 comments
(media) Did anyone notice that The Boys surveillance truck (S01E03) had Lamplighter on it? 3 comments

Predictions for ep4 🤔 and ep3 discussion 3 comments
Season 1 Episode 4: The Female of the Species - Episode Discussion 636 comments
(media) All of us waiting for Episode 4 232 comments
The Boys Diabolical Episode 4, Boyd in 3D discussion. [Spoilers] 5 comments
(media) Episode 4 had a great reference to this (The Boys - Butcher, Baker, Candlestickmaker #5) 0 comments
A train end of episode 4 the boys SPOILER 14 comments
Minor issue with episode 4 the boys universe as a whole 18 comments
Graffiti in Episode 4 6 comments

(media) PPC Presents: E5 The Boys Pt. 1 - for those interested, this short episode discusses Easter eggs, original comic info, characterization, social commentary, and more from Amazon Prime’s The Boys. 😈🖤✨ 0 comments
Quick question. How did the boys know that Ezekiel has a connection to the Compound V in season 1 episode 5? Cause they just suddenly went to that worship event, was it explained in the previous episode? And I just have poor memory 2 comments
Episode 5: The Last Time to Look on This World of Lies: Live Talk Discussion 180 comments
Season 1 Episode 5: Good for the Soul - Episode Discussion 789 comments
MY THEORY ON STORMFRONT CHARACTER (SPOILER FROM COMICBOOK ABOUT HOMELANDER AND STORMFRONT ORIGIN AND SPOILER FROM TV SHOW UNTILL EPISODE 5) 3 comments
(media) [SPOILER] Stormfront in episode 5 (German is just the best synchronization to watch The Boys :D) 0 comments
(media) Me while watching the final scenes of the boys episode 5 0 comments
When is the boys releasing UK time? Episode 5? 14 comments
shouldn't the boys ep 5 be out by now? 16 comments
(media) Butt Jazz (The Boys: Season 1 Episode 5) 0 comments
Is there an episode 5 discussion hub? 7 comments

my predictions and expectations after ep6 3 comments
Season 1 Episode 6: The Innocents - Episode Discussion 392 comments
Diabolical - Season 1 Episode 6 Official Discussion Thread 36 comments
(media) The Boys Episode 6 without context 9 comments
(media) The Boys E6 Fight but with synchronized music. 5 comments
Just wanted to say that i just started watching The Boys and so far it’s awesome! I’m on episode 6 and I hope the show maintains later in the seasons! 3 comments
_________'s speech at the end of ep6 1 comments

(media) The Boys episode 206 with no context 2 comments

While I appreciate most of the political discussion and satire, it was inappropriate in S3E3 to say... 11 comments
(media) I‘ve been waiting for a scene like this ever since “The Boys” established how powerful Homelander is. The dialogue delivery here is fantastic! [S3E3] 195 comments
(media) 'The Boys' Season 3 Teaser - June 3rd, 2022 334 comments
(media) 'The Boys' Season 3 - Official Trailer | Prime Video (June 3rd) 624 comments
(The Boys S3E3) Anyone know who played Young Grace Mallory? 6 comments
the boys season 3 episode 3 Frenchie's past?? 7 comments
The Boys was watched over 3.3 billion minutes (~10 million/Episode) during June. 2 comments
Season 3 Episode 3 Discussion Thread: Barbary Coast 4554 comments

The Boys - 3x04 "Glorious Five Year Plan" Pre-Episode Discussion 375 comments
(media) Top 8 Craziest WTF Moments In The Boys Season 3 Ep 2-3. Episode 4 going is gonna be some special kind of crazy 0 comments
apparently if you have a fire stick and search for the boys you can find s3e4 9 comments
Is it me or the Boys 3x04 not available in France ? 10 comments
How to watch the boys season 3 episode 4 4 comments
The Boys: S03E04 - Unofficial Soundtrack by Christopher Lennertz 2 comments
(media) Top 9 Craziest WTF Moments In The Boys Season 3 Ep 4 | It’s Getting Crazier 0 comments
The boys Season 3 episode 4 Question 7 comments
Anybody know the name of that cool sounding Russian Punk song that’s in S3E4 when The Boys arrive in Russia? 11 comments
(media) [Spoilers S3E04] A very classic The Boys moment 8 comments
Episode Discussion Season 3 Episode 4: Glorious Five Year Plan 646 comments
DISCUSSION ABOUT POSSIBLE PLOTHOLE AT THE END OF S3E4. 10 comments
(media) [SPOILERS S3E4] H0M28S39] 10 comments
(s3e4 SPOILER) So Let’s Talk About Stan Edgar 8 comments
What's the soundtrack at 49:14 of Season 3 Episode 4? 2 comments
Analysis of each song played in S03E04, wild theories included. 2 comments

The Boys - 3x05 "The Last Time to Look on This World of Lies" - Pre-Episode Discussion 223 comments
So they removed the fucked up parts of MM back story from the comics (The Boys Season 3 Episode 5) 11 comments
[Spoiler; S03E05] Discussion hints at a character yet to be introduced in future spin-off? 8 comments
[S3E5] THAT Ashley scene is very underrated. 27 comments
S3E5 Waiting Room [No Spoilers] 16 comments

(media) Did one of The Boys crew just confirm Season 4 for these 2?! 23 comments