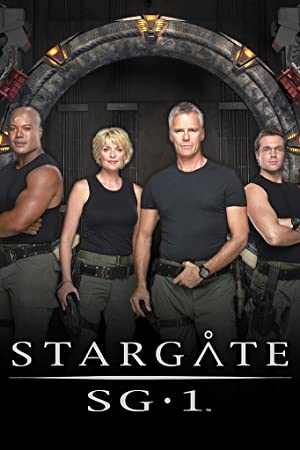 General Hammond summons Colonel Jack O'Neill out of retirement to embark on a secret rescue mission. O'Neill confesses that he disobeyed orders to destroy the Stargate on Planet Abydos, and that scientist Daniel Jackson may still be alive. Arriving on Abydos with his team, O'Neill meets up once again with the scientist, who has discovered a giant elaborate cartouche in hieroglyphics. All signs point to the fact that this is a map of many Stargates that exist throughout the galaxy - a development that makes the dream of the SG-1 team to travel throughout the universe in time a reality.

Solitudes s01e17 Was it really just a sidearm? :) 2 comments

To whoever was asking when the Midway station was first discussed: SGA S03E03 5 comments
SF Debris Review of Atlantis' Irresistible (S3 E3) brings up an interesting question: Was what Lucius did rape? 7 comments

(media) The Incan headdres at the center of the plot to the MacGyver episode S5E15 starring Richard Dean Anderson can be seen as a prop in another RDA show, Stargate SG-1 S6E18. 0 comments

(media) I don't know if it's been discussed before, but I found a Replicators leitmotif in SG-1 S05E19 (Finding Reese) that appears again in SGA S05E05 (RepliWeir sacrifices herself). Do any of you know if it repeats again? 3 comments

Stargate SG-1 S6 E12 is it me or did the Asgard sacrifice their homeworld for nothing? Couldn't they have dropped the signal in a moon or something 11 comments

Is "Memento" S06E20 the only Stargate SG-1 episode where first contact with SG-1 ended on a positive note? 8 comments
Does anyone know if there is a soundtrack name for the Stargate SG-1 Stargate Unearthing scene in 6x20 "Memento"? 0 comments

[Discussion][Stargate Sg-1 6x22] What exactly was the Eye of Ra? 7 comments
My issue with 6x22 Full Circle and the Ancients... 6 comments

In the Sci-Fi series Stargate SG-1 S08E7 the character Daniel Jackson, who is an anthropologist, states that newlywed Maasai husbands wear their wife's clothing for a month after they are married to know what it's like to be a woman. Is there ANY truth to that or is it just made up for TV? 8 comments
Stargate SG-1 S8E7 - When T-Money fuckin headshot beams that purse thief with a rock I lost my shit 9 comments

(media) I like making SG-1 memes. Made this one for Stargate SG-1: Season 9, Episode 9 "Prototype". 0 comments

Question about a line from S10E05 Uninvited 5 comments