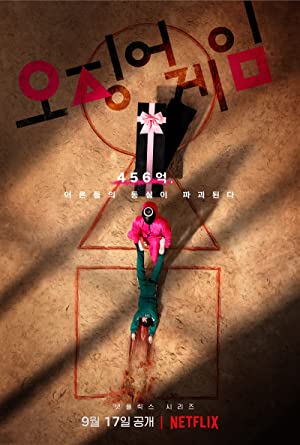 A story of people who fail at life for various reasons, but suddenly receive a mysterious invitation to participate in a survival game to win more than 38 million US dollars. The game takes place at an unknown location and the participants are locked up until there is a final winner. The story will incorporate popular children's games from the 1970s and 1980s of Korea, such as squid game, literal translation of its Korean name, which is a type of tag where offense and defense use a squid-shaped board drawn in the dirt.

Squidgame Episode 4 Discussion 793 comments
(media) i was watching a reaction of Squid Game and they shared this little piece of info from episode 4 that i thought was interesting. 26 comments

Squidgame Episode 5 Discussion 817 comments
Decided to watch squid game, accidentally started with episode 5 instead of 1, and it was perfect 45 comments

Just finished Episode 7, here are my predictions for what's going to happen next. Tell me how much I got right. I don't mind spoilers. 3 comments
(media) Adding To My Earlier post on how I believe Squid Game is now global in the SG universe. This is part of the Transcript from Episode 7 VIPs. I picked it up when watching. There are much better Redditors than me guys so get digging! 6 comments
Squidgame Episode 7 Discussion 2195 comments
Here is a Consensus Building Exercise for the office (or club or team): Take each player in Game 5 (S1E7) and rank them on a scale of good to evil. 0 comments
Probable mistake in this episode(S1E7 and S1E9), (discussion)...? 8 comments
What is your chance to succeed? The math behind Squid Game episode 7 21 comments
Squid Game Episode 7 was Questionable? 2 comments
I have a question about episode 7 of Squid Game (r.e the actually game in general) 1 comments
About the VIP (Ep 7 spoiler) 12 comments

Squidgame Episode 8 Season Finale 1051 comments
(media) This is how we all reacted to episode 8 of Squid game. 121 comments
Squid Game Episode 8 was Great but Not a Masterpiece. 4 comments

(media) Squid Game is so popular in Australia that even Googling 25.5 automatically fills the conversion. A LOT of people must have wondered how much the prize pool was at episode 2. 11 comments