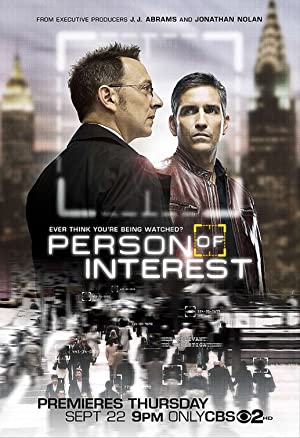 A billionaire software-genius named Harold Finch creates a Machine for the government that is designed to detect acts of terror before they can happen, by monitoring the entire world through every cell-phone, email and surveillance camera. Finch discovered that the machine sees everything, potential terrorist acts and violent crimes that involve ordinary people. When the government considered violent crimes between normal people "irrelevant", Finch built a back door into the system that gives him the social security number of a person involved in a future violent crime so he could act. Partnered with John Reese, an ex-CIA agent, the two work in secret to prevent violent crimes before they can happen. Eventually their activities lead to being hunted by the New York Police Department, CIA Agents in pursuit of Reese who was listed as dead, a computer hacker named Root who wants access to the Machine, and government officials who want to keep all knowledge of the Machine a complete secret.

Semi-Official Rewatch: Episode Discussion S1E1-2 "Pilot", "Ghosts" 10 comments
/r/S01E01 is a subreddit where we watch and discuss a different TV series each week. "Person of Interest" is our latest Weekly Watch. Consider this an invitation to join our discussion! 6 comments

We all know Finch is against the use of guns and violence of any sort. Has anybody asked themselves why? I've had this burning question since a specific scene (in season 1, episode 8) involving Reese and Finch. With season 5 about to premiere, this question has yet to be answered. More detail below. 13 comments