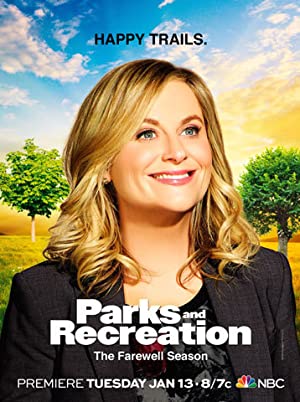 Leslie Knope, a mid-level bureaucrat in an Indiana Parks and Recreation Department, hopes to beautify her town (and boost her own career) by helping local nurse Ann Perkins turn an abandoned construction site into a community park. However, what should be a fairly simple project is stymied at every turn by oafish bureaucrats, selfish neighbors, governmental red tape, and a myriad of other challenges. Leslie's colleague Tom Haverford, who delights in exploiting his position for personal gain, is as likely to undermine her efforts as to help her, while her boss, Ron Swanson, is adamantly opposed to government in any form, even though he's a bureaucrat.

On Parks and Recreation Season 2 Episode 16 "Galentine's Day" what song did Tom Haverford played to his ex-wife, Wendy? 2 comments

From now on when I want to leave a poor review: Parks and Recreation Season 3 Episode 11 3min 7sec 2 comments

(media) I recently started watching Parks and Recreation. Today I watched season 4 episode 6. This scene has to be the most purest form of depiction of an onscreen relationship. 13 comments

(media) I was watching this scene from Season 5 Episode 8 of Parks and Recreation and I was getting HUGE The Good Place vibes. Maybe this scene was inspiration for that part of “The Good Place”? 4 comments

How do you rank the Bachelor parties of each character in PandR in S05E10? 5 comments

I’d never caught what happened to Leslie’s dad until tonight - S5 E14 (Ben and Leslie). This is only the 5th time watching the entire series. Am I the only that took this long to figure out? 2 comments

Why is the most recent episode of Parks and Recreation, Season 6 Episode 5 "Gin It Up!" called "Gin It Up!"? 2 comments