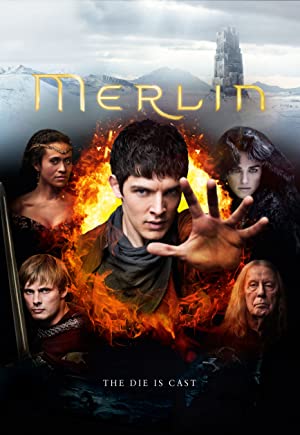 Young Merlin (Colin Morgan) is a teenager, discovering and then learning to master his magical gift. Magister Gaius (Richard Wilson), King Uther Pendragon's (Anthony Head's) learned court physician to whom he's assigned as humble page, teaches him medicine, coaches his magical self-study, and warns him of Uther's strong aversion to magic. Merlin becomes squire to the noble but imprudent crown Prince, Arthur (Bradley James), whose fate is linked with Merlin.

Episode 4-09, what exactly did Merlin do at the end? (Spoilers!) 2 comments

I just rewatched Merlin S1 E8, Jesus I forgot how dark it was 6 comments

Just finished Sins of the Father (S02E08) 4 comments
Season 2 Episode 8, Arthur really listens to Merlin 12 comments
Do they ever stop doing a hard reset every episode? And do they ever stop treating Merlin like shit, esp given the fact that he's Merlin? (Currently on s02e08) 11 comments

Did Morgana know that she was the cause of the sleeping draft that put everyone in Camelot to sleep? Was she working with Morgause in 2x12 or did Morgause unknowingly spell her half-sister? 9 comments
Season 2 episode 12, Merlin poisons Morgana although she didn't cast the spell. So isn't he wrong in going to poison her when she had no fault, made me sort of lose respect for him. Especially when she considered him a friend. No season 3 or further spoilers please. 24 comments

(media) Can we all just take a moment to appreciate Katie & Colin in this scene? (3x02) They gave us a whole conflicted conversation between Morgana & Merlin without speaking one single word. 9 comments

Some thoughts and questions from s3 e4 'Gwaine', please let me know if you have any answers or thoughts! 7 comments

Some questions about how everything ties togethrmer and about everyones motives, generally from s3 e5 'The Crystal Cave' 4 comments

4x1 6 comments
S4E01 discussion thread (SPOILERS) 32 comments
(media) Recap and discussion of S4E1- There be SPOILERS ahead. 0 comments
Just rewatched 'The Darkest Hour' (S4 E1 and 2) and had some thoughts and questions I wanted to share :) 11 comments

S4 E6: A Servant of Two Masters Discussion Thread 20 comments
So wait was Merlin mocking Morgana about saying this in 4x06 "I'm quite proud of those Accomplishments? was he talking about being a servant or mocking Morgause death to Morgana's face? 26 comments
Merlin 4x06 Servant of Two Masters Review 18 comments
First time watching Merlin: Season 4 Episode 6 1 comments
Why didn't Merlin break free from his confines and escape from Morgana in 4x06? 16 comments

S4 E10 was great, but a lot of thinks that have annoyed me throughout this season sort of culminated in this episode! My thoughts and comments. (part 1) 4 comments
S4E10: A Herald of the New Age Discussion Thread 23 comments

Do you think Merlin ever went to the crystal cave to try and see Arthur’s ghost the way he did with Balinor in season 5 episode 12? 6 comments
I finally watched the Merlin s5 finale - here are my thoughts and opinions on episode 12, lmk what you think! (part 1) 1 comments
What if Merlin saw Arthur and Mordred fighting when he looked into the crystal? How would he have reacted? Season 5 Episode 12. 0 comments