King of the Hill Discussions 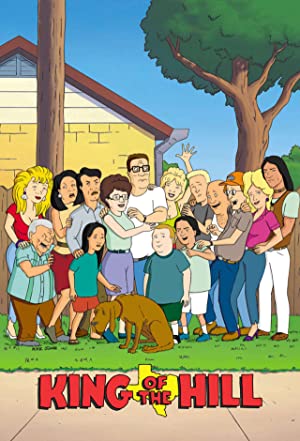 Hank Hill, a propane gas salesman in the fictional town of Arlen, Texas, is often besieged by the idiosyncrasies of society, but finds some serenity in his home life with his wife, substitute Spanish teacher Peggy, his awkward son Bobby, and his live-in niece-in-law Luanne Platter. Adding flavor were Hank's friends, divorcé military barber Bill Dauterive, paranoid Dale Gribble (with an obsession with government conspiracy theories), and gibberish-spouting Boomhauer.

King of the Hill 2x11 "The Unbearable Blindness of Laying" Episode Discussion 4 comments
(media) Discuss/When did Peggy get her newspaper job?been watching through again start2finish, and in seas2ep10 Peggy gets new job writing for newspaper. She “meets” coworker in this episode as well, but in seas9ep12 she already knew coworker/had job. Bobby used her columns in seas4ep11. Timeline confusion? 7 comments

King of the Hill 4x5 "Aisle 8A" Episode Discussion 17 comments

King of the Hill 6x22 "Returning Japanese (part one)" 23 comments

S8E11 - Luanne shouldn't have had to taken the fall with Bill. 94 comments

I'm watching S10E2 "Bystand Me" and Peggy just got her job at The Bystander and is meeting co-workers for the first time but, in S9E12 "Smoking and the Bandit" Peggy already has a job at the Bystander and knows her co-workers. This could be a continuity error but im wonder if this has been discussed 7 comments