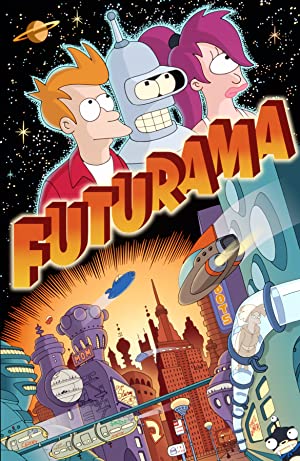 Philip J. Fry is a twenty-five-year-old pizza delivery boy whose life is going nowhere. When he accidentally freezes himself on December 31, 1999, he wakes up one thousand years in the future, and has a chance to make a fresh start. He goes to work for the Planet Express Corporation, a futuristic delivery service that transports packages to all five quadrants of the universe. His companions include the delivery ship's Captain, Leela, a beautiful one-eyed female alien who kicks some serious butt, and Bender, a robot with very human flaws.

Space Podcast 3000 episode 2 is up, now with Blackjack! And hookers! 0 comments

To shreds, you say? Space Podcast 3000 episode 3, "The Antenna in the Room" is now up! 0 comments
(media) Futurama the Game! Episode 3 0 comments

Pop the sham-paggin, Space Podcast 3000 episode 4 is up! 0 comments
(media) [S1,E4] Loves Labor Lost in Space IMO is the best Futurama episode. From the opening clip to the intro of Nibler and Zap Brannigan this episode to me was the sign of the shows greatness to come. Discuss! 3 comments

(media) Bender tossing out the countess’s bracelet is probably my favourite continuity from Futurama. From S1Ep10 to S3Ep5, an almost 3 year gap between the two episodes! 9 comments

Better than a stuffy old podcast about the buttocks! Space Podcast 3000 episode 6 is up! 1 comments

(media) Was watching Futurama when suddenly I noticed something... Episode 51: Roswell That Ends Well 28 comments

[S02E05 Discussion] They could make an entire episode for each character with this episode's premise and it would be great. 2 comments

How come Fry is disabled at the beginning of "Where No Fan Has Gone Before" (S4E12) but is never shown why? 5 comments

Have I been doing the chicken dance wrong this whole time?! (And miscellaneous discussion of S07E08) 2 comments

Discussion thread for Futurama S07E22 - "Leela and the Genestalk" 24 comments
Why the last episode (S7E22) isn't as sad as it seems...(Spoilers) 2 comments

(media) Is this an Easter egg to Wreck it Ralph found it on Murder on the Planet Express Futurama: Season 7, Episode 24 6 comments

Is there a reason why that episode 2 season 9 of Futurama is on aspect ratio 4:3? (Disney plus) 2 comments

Just noting the irony of watching Futurama showing a 16x9 TV in the episode ”A Head In The Polls,” while in a 4x3 broadcast format…on my 16x9 TV. 2 comments