F Is for Family Discussions 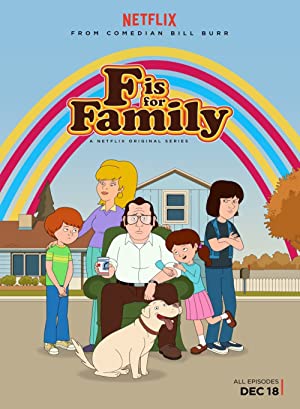 A father trying to provide for his family with a job he hates, a mother trying to be the wife and parent that society demands her to be, a teen full of angst with a love for rock-n-roll, a kid who is cursed with "middle child syndrome" who just wants to have fun, and a little girl who is far from "girly" but is still the apple of her father's eye all make for the perfect recipe of 1970's America. Back to a time when tobacco was healthy, a kid's curfew was when the street lights went out, mom stayed at home, and sex, drugs, &amp; rock-n-roll made the world go 'round. Watch how the typical, middle class American family held it together.

S04E02 Discussion "Nothing is Impossible" 22 comments

F is for Family Season 5 : Episode 4 - "Thank You So Much" Discussion Thread 4 comments

F is for Family Season 5 : Episode 6 - "Screw Ups" Discussion Thread 6 comments
I want a serious discussion about who fucked who on season 5 episode 6. if you know, you know and please I want to seriously talk about this (I'm not christian or Jewish or of any religion) 10 comments