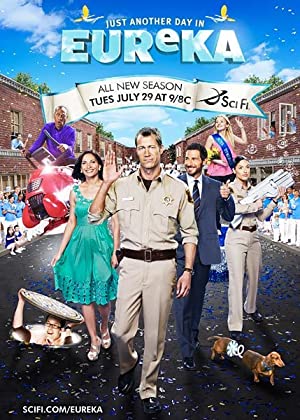 With the help of Albert Einstein and other trusted advisors, President Harry S. Truman commissioned a top-secret residential development in a remote area of the Pacific Northwest, one that would serve to protect and nurture America's most valuable intellectual resources. There our nation's greatest thinkers, the über-geniuses working on the next era of scientific achievement, would be able to live and work in a supportive environment. The best architects and planners were commissioned to design a welcoming place for these superlative geniuses to reside, an area that would offer the best education for their children, the best healthcare, the best amenities and quality of life. A community was created to rival the most idyllic of America's small towns - with one major difference: this town would never appear on any maps. At least, none that haven't been classified "eyes only" by the Pentagon.

[Rewatch] If you're participating in the rewatch, this is S1E2's discussion thread 9 comments

I just finished a 1.5 month marathon of all current Eureka eps. I loved it. 9 comments

How did Jack’s ex get into Eureka in s2 e2? 4 comments