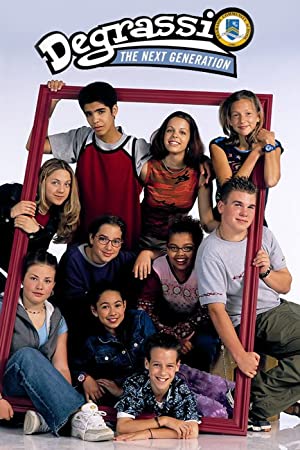 The next generation of the students at Degrassi are here. Degrassi: The Next Generation takes place 14 years after the cult hit show "Degrassi Junior High" as students continue to deal with the obstacles of being a teenager. From issues like relationship problems, homosexuality and bullying to more darker issues like rape, school shooting and death. Degrassi: The Next Generation plunges into the world of what this generation is really going through.

Official Degrassi Rewatch -[DJH S01-E01] Kiss Me, Steph 31 comments
Degrassi Mother and Child Reunion Discussion thread (1x1/1x2) 3 comments
Degrassi 2022 Reboot Episode 1 (1000% real): after running out of new girls to date, Drew Torres decides to rekindle a former love… that’s right. all of them. but which one will Drew end up with? 10 comments

(media) watching the first 2 episodes of DJH season 2 for the first time and idk if i ever had such a intense reaction behind a degrassi episode EVER as i did with episode 2 😭 0 comments
(media) Episode 2 of my roommate and I on our journey through Degrassi. Season 2 spoilers. 0 comments

Season 2, Episode 3: Check Out the Spoilers in Here! 10 comments

Season 6 ep 11 11 comments
Does anyone who starts watching Degrassi now or very recently ever get through it without [redacted : Season 6, Episode 11] getting spoiled? 15 comments

(media) I’ve been rewatching Degrassi and I’m currently on season 11 and everyone remembers the famous above the dot scene when Clare screams at Eli in episode 3 but this scene was in episode 37. As someone thats a long time fan of Degrassi this scene felt too familiar 7 comments

(media) S12E5 My favorite thing ever is when Becky told Eli “This isn’t right!” And Eli replied with “Welcome to Degrassi” one of my favorite lines in the show 39 comments

(media) On this day in Degrassi history, Season 12 premiered ten years ago. Season 12 is not only remembered for its jaw-dropping drama but also for how it tackled real issues in ways that were never before seen. To celebrate the 10th anniversary of this iconic season, here's the "Bite Your Tongue" promo! 15 comments

[Episode 13.06 Discussion] Some nice, fresh spoilers for ya! 24 comments

Degrassi S14E17 "Get It Together" Discussion 35 comments

Degrassi S14E18 "Give Me One Reason" Discussion 58 comments