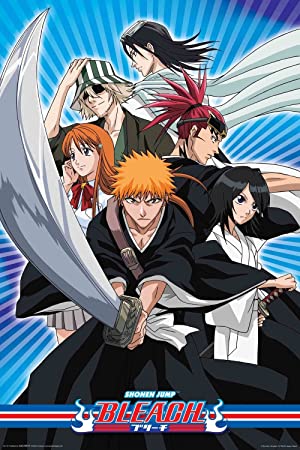 High school student Kurosaki Ichigo is unlike any ordinary kid. Why? Because he can see ghosts. Ever since a young age, he's been able to see spirits from the afterlife. Ichigo's life completely changes one day when he and his two sisters are attacked by an evil, hungry and tormented spirit known as a Hollow. Right in the nick of time, Ichigo and his siblings are aided by a Shinigami (Death God) named Kuchiki Rukia, whose responsibility it is to send good spirits (Pluses) to the afterlife known as Soul Society, and to purify Hollows and send them up to Soul Society. But during the fight against the Hollow, Rukia is injured and must transfer her powers to Ichigo. With this newly acquired power, so begins Kurosaki Ichigo's training and duty as a Shinigami to maintain the balance between the world of the living and the world of the dead...

Would you rather have a Bleach remake from episode 1 or just for an adaptation of the Blood War? 23 comments
Rewatching Bleach from Episode 1 1 comments
Bleach Thousand Year Blood War Episode 1 Discussion Thread 1364 comments
Did episode 1 of TYBWA feel rushed to anyone else? 9 comments

A discussion on what would've happened if Ichigo became a Hollow in Episode 19... 15 comments

I just started watching bleach.I reached upto the Episode 24 and I have some doubts/confusion in my mind.Can anyone clear those up? 10 comments

I am rewatching bleach after 5 years and i have some questions it would be nice if some yall could answer or tell me if they or if my answers are going to be answered later on. im currently on episode 25. 7 comments

So I'm starting to watch the Bleach anime on a anime site and I'm watching episode 50 which is a filler episode and I come across a scene with Don Kononji that kind of looks like... (NO SPOILERS YALL I JUST STARTED WATCHING THE ANIME!!!!) 10 comments

My wife is watching Bleach for the first time... and I'm so happy because we just watched episode 60. 9 comments

I JUST finished Episode 61 and learned Gin and Tosen are working with Aizen, and have one question related and one regarding “Burn the Witch” 12 comments

Can I continue Bleach at Episode 109? (*Spoilers Possibly*) 12 comments
(media) When you rewatch Bleach on Netflix but then realize it stops at Episode 109 39 comments
Bleach episode 109 and 342 2 comments

does anyone know a certain song in bleach episode 129? 4 comments

Rewatching Bleach: Episode 195 is unfortunately one of the main reasons why people begin to hate Orihime. 6 comments

(media) Bleach Episode 204, is that fucking SENNA in the background? 19 comments

What chapter do I start bleach if I’m on episode 275? 5 comments

(media) Bleach episode 280 (post episode gag), resumed this anime after a long time and i dont remember, what is that blue flame thingy near hisagi? i think I've seen it somewhere but i cant remember what it is 4 comments

(media) Started watching bleach 2 months ago.I ve come to ep 293 and this is hands down the most disrespectful L ever inflicted in anime history 49 comments

(media) Currently on episode 300 of the anime! Bleach has become my favorite <3 55 comments

Hi was wondering if anyone new what the song is for the opening in bleach episode 351? 2 comments

(media) In Bleach Episode 359, there is a shop behind Ginjo named Studio Peirrot, the animation studio behind Bleach. 10 comments

Is bleach worth watching? I calculated and took out every filler episodes and it seems there are still 205 canon episodes. Idk if it's worth watching that much since the ratings are only 7.89 on mal. 7 comments

Will Bleach Thousand-Year Blood War be an anime series of its own? Or will it just be season 17 to the already existing 366 episodes of Bleach? Like will ep 1 of Bleach TYBW be episode 367 is what I mean? 7 comments

(media) Random Trivia: Bleach Opening 3, Ichirin no Hana, fades out differently between episodes 52-58 and 59-74. "THERE'S NO OTHER". In the 1st version the "OTHER" is a fading scream, Japanese DVD version only. 9 comments