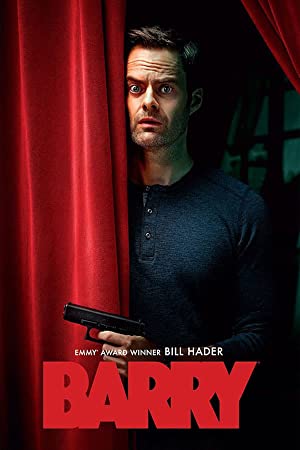 Disillusioned at the thought of taking down another "mark," depressed, low-level hit man Barry Berkman seeks a way out. When the Midwesterner reluctantly travels to Los Angeles to execute a hit on an actor who is bedding a mobster's wife, little does Barry know that the City of Angels may be his sanctuary. He follows his target into acting class and ends up instantly drawn to the community of eager hopefuls, especially dedicated student Sally, who becomes the object of his affection. While Barry wants to start a new life as an actor, his handler, Fuches, has other ideas, and the hit man's criminal past won't let him walk away so easily.

Barry - 1x01 "Chapter One: Make Your Mark" - Episode Discussion 158 comments
(media) Barry | S1:E1 "Make Your Mark" | Reaction & Discussion! 7 comments
I am on episode 1 of "The Kominsky Method" and I can already tell this show will fill the "Barry" gap. 9 comments
Dare I show you my Barry scene (first Residuals scene from episode 1 as SALLY) from acting class? 2 comments
Barry's Monolgue Season 1 Episode 1: Make Your Mark 0 comments
(media) Barry has long disliked motorcycles (S1E1) 12 comments
why does no one ever discuss the narrator in S01E01 & 02? 112 comments

Barry - 1x03 "Chapter Three: Make the Unsafe Choice" - Episode Discussion 156 comments
Episode 3 is setting up the next few episodes. Is Gene and his family safe? Is Hank losing control of the Chechens? Is Barry gonna die blowing up Cristobal? Is Fuches turning into a Panther? 7 comments
(media) Sarah Goldberg and Henry Winkler at SF Film Festival promoting Barry. Episode 3 is a treat, you guys! 11 comments
(media) I have no idea if anyone else saw this, but this is hilarious. It was in S1 E3, in Barry’s daydream sequence. 18 comments

How?! HOW do you get to episode 4 of the 3rd season of Barry and THEN decide to post about out it becoming too woke? 7 comments
Barry - 1x04 "Chapter Four: Commit...To You" - Episode Discussion 226 comments

Barry - 1x05 "Chapter Five: Do Your Job" - Episode Discussion 336 comments
[Discussion] The 'Class Confrontation' scene in Episode 5 is the reason why I love this show. 1 comments
I know I'm a week late, but I need to ask: why am I the ONLY person I've seen on this reddit who hated episode 5? 60 comments
Episode 5 did an excellent job showing gun safety. When raiding the warehouse, trigger discipline was in effect and his partner made it a point to never point the gun at barry. Small detail i liked. 8 comments
Thank you "Barry". I laughed through almost all of the episode 5. Now I know what a horrible person I am, forever. Thanks. 3 comments
(media) Barry 1x05 Promo "Do Your Job" + Inside the Episode for 1x04 0 comments

(media) Does anyone know the everyone's aversion to yellow flowers? I can't think of any references other than yellow is cheerful, scenes not cheeful. S2E2 Cousineau's Post-It has written, "Buy flowers not yellow." S3E1, Barry asks if he should buy flowers and Sally responds, ".. nothing yellow, okay?" 14 comments
Barry - 2x02 "The Power of No" - Episode Discussion 419 comments
(media) Barry 2x02 Promo "The Power of No" + Inside the Episode for 2x01 1 comments
(media) Barry season 2, episode 2 recap: Life reflects art on ‘The Power of No’ 2 comments

Barry - 2x05 "ronny/lily" - Episode Discussion 1340 comments
When the wild girl slips from the roof of the car to the back seat behind Barry and Fuches, why does Fuches already have a bandage on his cheek where the girl later bites him? Season 2, Episode 5. 5 comments
(media) Barry 2x05 Promo "ronny/lily" + Inside the Episode for 2x04 5 comments
(media) Barry: Behind the Scenes of Season 2 Episode 5 with Bill Hader & Alec Berg | HBO 2 comments
(media) Barry Season 2 Episode 5 recap: Fuches with super glue is comedy gold 2 comments
I love S2E5 how Fuchs is not quick to help or care about Barry's gash in his back...and the moment he gets glued to the steering wheel he is screaming at Barry to get items at the store to remove the super glue. 14 comments
Season 2 Episode 5 of Barry is one of the best episodes of TV I've ever seen. 4 comments