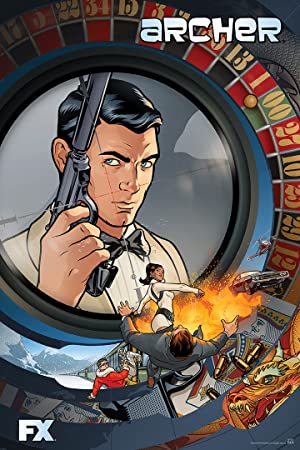 At an international spy agency, global crises are merely opportunities for its highly trained employees to confuse, undermine, betray and royally screw each other. At the center of it all is suave master spy Sterling Archer, whose less-than-masculine code name is "Duchess." Archer works with his domineering mother Malory, who also is his boss. He also has to deal with his ex-girlfriend, Agent Lana Kane and her new boyfriend, comptroller Cyril Figgis, as well as Malory's lovesick secretary, Cheryl.

(media) Archer P.I. Episode 1. Just wondering if anyone is having any issues getting glued to pick up. The dog was full on my screen and wouldn't register. Also general discussion on the 2 screen experience 33 comments
Rewatch Discussion: S01E01 - "Mole Hunt" 18 comments
(media) Krieger isn't the only clone on Archer -- Episode 1 65 comments

Rewatch Discussion: S01E04 - "Killing Utne" 26 comments
(media) Nice to have new Archer episodes, but the animators left the AKM's fire selector on "Safe" in Episode 4. Literally unwatchable. 65 comments
(media) I started to rewatch this like millionth time last week and just noticed this mistake (or joke) on Episode 4 of Archer Vice. 12 comments

Rewatch Discussion: S01E07 - "Skytanic" 26 comments
(media) Episode 7 is an AJ episode and it can't come fast enough! How do you think Archer will react when he sees her again? 9 comments

Rewatch Discussion: S03E09 - "Bloody Ferlin" 10 comments
When Archer and Ray go to Ferlin, WV, (s3 e9) the patches on the sheriffs arm are the same as actual West Virginia Sheriff patches, even though Ferlin is a fictional town. They did their research! 25 comments

(media) I have lived in this super specific suburb of Montreal (La Prairie) for more than 20 years and I just thought it was really cool to see a sign for it in Archer (Midnight Ron - S4E4). 32 comments
S4 E4: Midnight Ron 7 comments
Discussion thread for Archer S04E04 - "Midnight Ron" (self.ArcherFX) 172 comments

Discussion thread for Archer S05E02 - "A Kiss While Dying" 566 comments