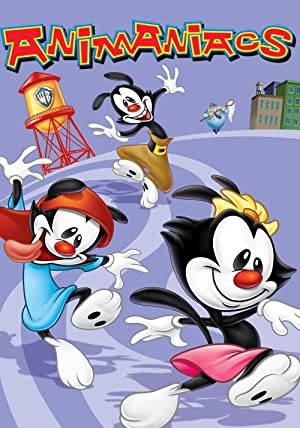 Ensemble cast of off-the-wall Warner Brothers characters, appearing in a wide variety of roles. Mainly staring the Warner Siblings Wakko, Yakko, and Dot, who were created by the WB Studios but found they were just too "zany" to be of any use to the studio. Other popular characters in the series include: Pinky and the Brain, two lab mice bent on world domination. Rita and Runt, a cat and dog team who get into perilous situations every episode but always seem to find time to sing a song, Bobby, Pesto, and Squit, the Goodfeathers, part of a New York City mob of pigeons, who take orders from The Godpigeon and worship Martin Scorsese. Slappy the Squirrel is a late middle-age squirrel. She starred in a series of popular cartoons in the Golden Age but is now retired and looking after her nephew, Skippy Squirrel. Buttons is a watch-dog, charged with watching the mischievous toddler, Mindy. Chicken Boo is a giant chicken trying to integrate into human society. Flavio and Marita are two urbane hippopotami.