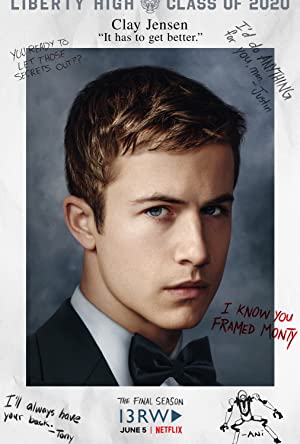 Thirteen Reasons Why, based on the best-selling books by Jay Asher, follows teenager Clay Jensen (Dylan Minnette) as he returns home from school to find a mysterious box with his name on it lying on his porch. Inside he discovers a group of cassette tapes recorded by Hannah Baker (Katherine Langford) -his classmate and crush-who tragically committed suicide two weeks earlier. On tape, Hannah unfolds an emotional audio diary, detailing the thirteen reasons why she decided to end her life. Through Hannah and Clay's dual narratives, Thirteen Reasons Why weaves an intricate and heartrending story of confusion and desperation that will deeply affect viewers.

(media) Watch "13 reasons why 1x07 powerful scene" on YouTube. What do you get when you cross a depressed teenage loner *WITH A SOCIETY THAT ABANDONS HER AND TREATS HER LIKE A SHAMELESS WHORE???!!!!* 0 comments
#13Rewatch : Tape 4 Side A (1x07) 9 comments
Discussion: Episode 7 5 comments

#13Rewatch : Tape 7 Side A (1x13) 4 comments
Episode 13 is socially irresponsible and problematic and heres why. 136 comments

#13Rewatch : The Smile at the End of the Dock (2x06) 11 comments
Clay and Justin’s discussion about Hannah in S2E6 - he wasn’t slut shaming Hannah 40 comments

#13Rewatch : Angry, Young and Man (3x04) 6 comments
Since Alex and Jessica already knew about Bryce's death, why were they discussing about Tyler and his gun in S3E4? 5 comments

(media) From r/science According to a study 13 Reasons Why was associated with a 28.9% increase in Suicide rates amoung US Youth from 10-17 in the month of April 2017 following the shows release. 69 comments